As you know by now my boys love dinosaur play, whether it’s making fossils or creating their own small world play. The fun is endless with dinosaurs and a vivid imagination!

My boys were thrilled to receive a parcel from Schleich a few weeks ago; a Dino Cave Playset! An actual cave! They were super impressed. 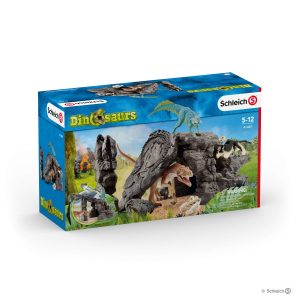 The set contains a Herrerasaurus, a Psittacosaurus, a Microraptor, a cave, a column, a stone and a stone slab. 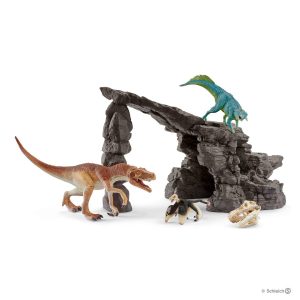 The Dino Cave set comes with loads of great features; the front part of the cave can be transformed into a catapult when the stone column is moved, which we loved, the stone slab buries everything under it, and the Herrerasaurus has a moveable lower jaw!

The set is so well made, sturdy, and factual. It opens up a whole world of play. We made it into a sensory activity too. We added water, cereal, and pasta. My boys played for hours. And the beauty? The Dino Cave set and dinosaurs are ALL waterproof! 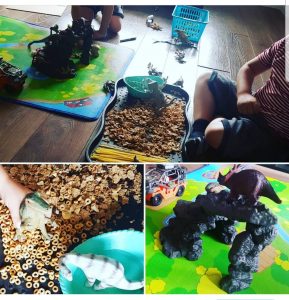 The Dino Cave set is available online and retails at £44.99. We highly recommend it!

The dinosaurs also make great diy fossil templates to for some saltdough creations!

Sleigh gets another BIG thumbs up from Swords and Snoodles!