Sleep is a touchy subject with parents, especially parents of children aged 7 and below. And if these parents say it isn’t then they’re telling a big fat lie! My children’s night-life in this house is a VERY sore subject some days!

My 6yo was an awful sleeper from day one. Health implications and being born a bit underweight at 36 weeks didn’t help the nocturnal little monster either. I didn’t make a conscious decision to co-sleep but after 3 months of no sleep I couldn’t function anymore. Sleep was sleep. And boy did I need sleep.

He always preferred going to sleep on someone, preferably momma. He was a snuggler. He still is. I love that about him.

He goes through phases. From around 14 months old he would go to bed around 6.30pm and sleep until 8am with a few wake ups. Then he hit two and the wake ups were more frequent and a good 8 on the Tantrum Richter Scale. After a few months he settled and just woke a few times.

Add a CMP (cows milk protein) allergy into the mix too, that really messes with your children’s night-life (and yours!)

Then with the terrible three’s came night terrors. These are frightening and infuriating. There’s nothing worse than a flailing child who is crying hysterically for momma, but can’t see momma right next to him. After research though, we combatted these over a week and thankfully they became a rarity.

My 6yo now sleeps 6pm until 5.30am. The last few months he wakes anything from 3 times during the night upto 15 times. He shares a room with his younger brother, so this is a nightmare. I miss sleep.

My youngest, on the other hand has always slept alone from day one. I think a momma with a c-section wound, a wound drain, a catheter, and a six day old broken ankle didn’t give me, or him much choice. I’ll save that magical yet horrendous time of my life for a future blog post.

He loved his moses basket and he was no problem transitioning to a cot. The only problem was the effects of naps! They made him nocturnal, yet he couldn’t manage without one. It was a nightmare.

He enjoys sleeping. He doesn’t like people by him when he sleeps. As a baby he’d never let you rock him to sleep.

My two boys share a room. They go to bed at the same time. They enjoy sharing. The only pitfall is that they wake each other up. Alot.

In my house we have a sensor. This sensor alerts my children whenever my butt hits the sofa, my dinner is ready, and when my head hits the pillow. This sensor is the bain of my life!

I get worried to exhale and get comfortable when I go to bed. I often lie on the edge of my bed, with my hair still in a topknot, just so I feel too uncomfortable to drop off to sleep properly – just so I can have ten minutes of peace. Then once I exhale and snuggle down the sensor kicks in “Mummyyyyy I’m scared! I want you!”.

This is just the tip of the sleep iceberg in this house. I’m guessing yours too? I’m hoping yours too!

Here is a typical night in our house, including bedtime routine:

5.45pm – Pj’s, nappy, amd bathroom time. D1 refuses to take a pee. D1 has a tantrum. D1 is ignored. D1 takes a pee. D2 refuses to brush his teeth. D2 brushes his teeth whilst in a martial arts grip by Daddy. D1 brushes teeth. We read a story. We are guilted into a second story. We get wise. No third story.

6pm – Both in bed. Kissed. Prayers said. A billion ‘I love you’s’ exchanged. D1 prays for a Lego Advent Calendar. D2 prays for a cake. Classical music switched on. Lights out.

7.30pm – Mummy sits down to eat dinner. D1 wakes up screaming. D2 is scared awake by D1. Mummy to the rescue. It’s hard knowing which one to calm first. D1 calms. D2 snores. Both are sweaty. Mummy pulls back both duvets. D1 snores.

9.30pm – D2 screams. Only mummy’s and dolphins can hear this scream. D1 snores away. D2 wants to sleeps in mummy and daddys bed. I say no. He moans. He forgets and snores again.

Mummy decides she needs bed herself.

9.50pm – Mummy lies on the edge of the kingsize bed. She doesn’t take her hair down. She doesn’t exhale. She doesn’t snuggle down. Instead, she lies there waiting for the words “Mummy I want you!”, oh and three minutes later there they are. Those lovely words.

D1 saw a shadow. Mummy convinces him to close his eyes.

10.02pm – Mummy sneaks into bed and gets comfy quickly before the next wake up call.

10.05pm – Daddy sneezes. Loudly. Mummy waits for her name to be squawked. Phew, everyone remains asleep.

11.55pm – D2 screams. He is blocked up. He says he has a bogey. He has no bogey. Mummys vapour rubs his chest. D2 doesn’t want Spiderman so throws him at D1. D1 stirs a little. Mummy holds her breath. D1 snores. D2 goes to sleep sniffing.

1.30am – D1 wakes. He wants mummy to put his dummy back in his mouth. Mummy searches for it. It’s vanished. D1 then announces he has it in his hand but he can’t put it in his own mouth because he’s too tired. Dummy in. D1 back to sleep. Mummy escapes.

3.40am – D2 shouts “Morning time!” Those words fill us with dread before 5am. D2 is bribed with sweets for breakfast if he goes back to sleep. D2 sleeps.

4.45am – D1 wakes up crying. I run like a puma into him pleading with him to he quiet so D2 can sleep. D1 wants to go downstairs. Lego City on the tablet persuades him to chill in mummy and daddys bed. Mummy snoozes. Daddy is asleep. Still.

5.25am – D2 bursts into the room and shouts “It’s time o clock!!” This translates to ‘get up now!’ We persuade him to play a game on the tablet too.

5.50am – D2 has wind. D1 cannot cope sitting next to D2. D1 punches D2. D2 cries before turning into the Hulk. A brawl commences, but Daddy is the only one injured.

6.05am – Mummy has enough. Everybody downstairs.

7am – Daddys alarm goes off for the first time. He hits snooze.

This week, Swords and Snoodles has joined with some fellow bloggers to create five fairytale themed sensory blog posts. The five fairy tales were Little Red Riding Hood, Goldilocks and the three bears, Jack and the Beanstalk, The Three Little Pigs, and The Gingerbread man.

I chose to base my sensory blog post around the story of the Gingerbread man because my children are both obsessed with it, and they are very familiar with the story. 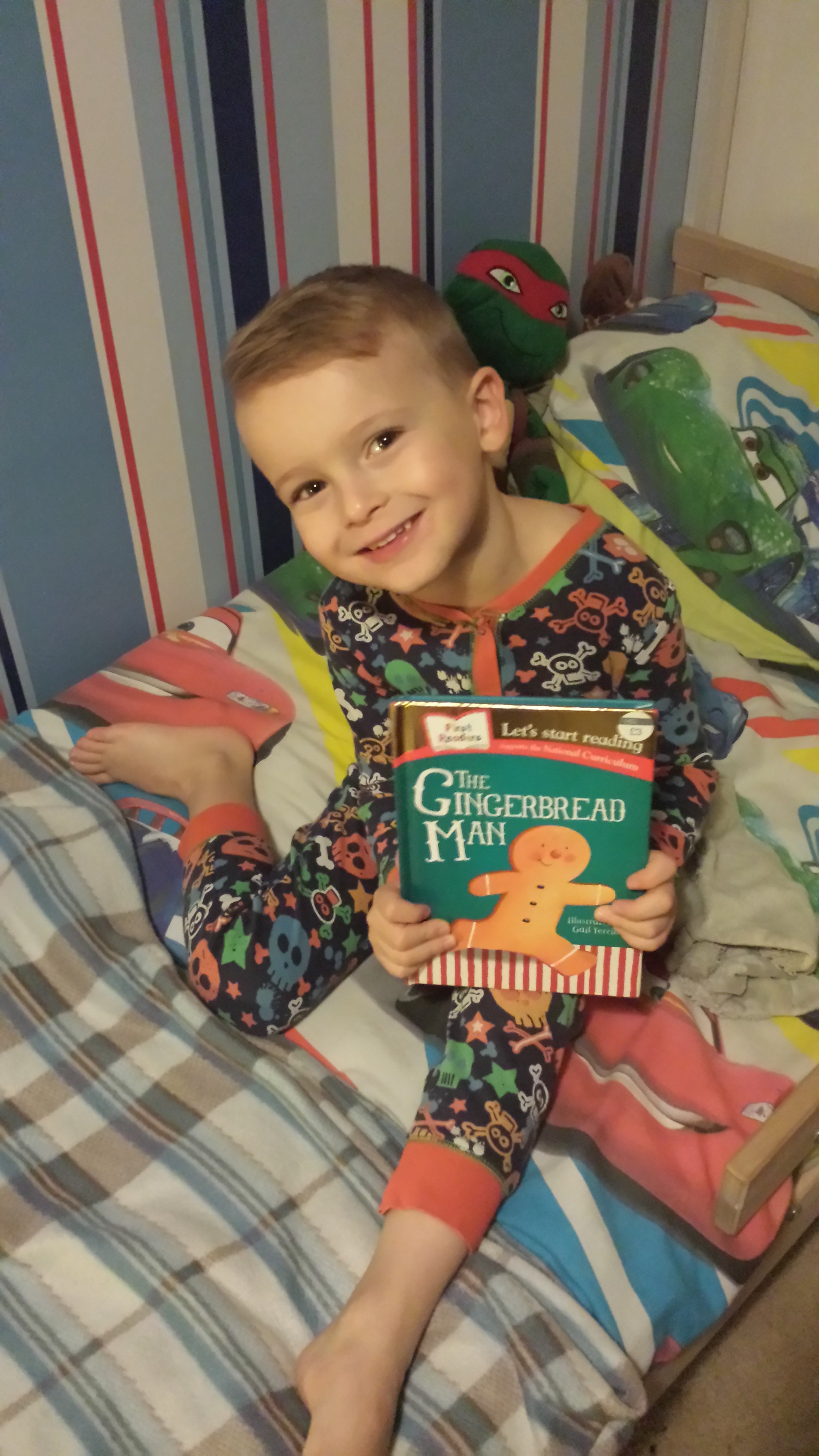 I’m not really a sensory blogger, I usually just write about things that are on my mind or my heart, although I do make sure I do at least four sensory activities with my children each week. My fellow fairytale bloggers emphasise sensory tubs as their main item, which I think all looked absolutely amazing. My boys would have loved them. I haven’t done a sensory tub and there are various reasons for this. Sensory tubs don’t work well with my 2yo and my 4yo together – they have totally different personalities, one is beyond messy and the other is very neat and likes things in order. This means that sensory tub activities, as a pair, usually end up in screaming matches and full on wrestling, yet neither of them are behaving bad, they just have different approaches to exploring their world. For this main reason I decided to do a few activities based around the theme of The Gingerbread man.

Our first activity involved a sensory setup of The Gingerbread Man story. We used fake grass sample squares, aqua beads, Happyland figures & accessories, characters on sticks,and plastic animals. I then presented it to my boys. They loved it. They knew straight away what the story was, and they reenacted it several times. They explored this setup for 90 minutes. 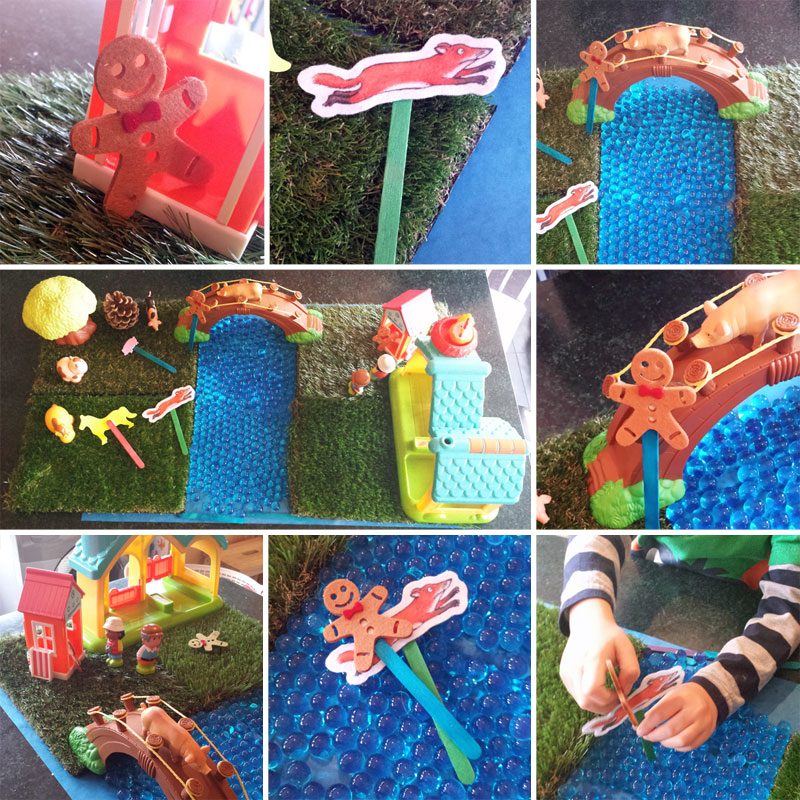 For our next activity I decided to do a little science experiment with them. I asked them if they knew what would happen if the gingerbread man had fallen in the water. My 4yo said “He’d be all soggy and his head would crumble off!” I then presented them with a little experiment setup which involved three cups full of different textures/liquids. Cup one had fake snow, cup two had water, and a third cup had aqua beads. They absolutely loved dipping gingerbread men into the cups to explore the effect the contents had on them. As you can see in the pictures below they particularly enjoyed seeing The Gingerbread Man meet a watery fate! 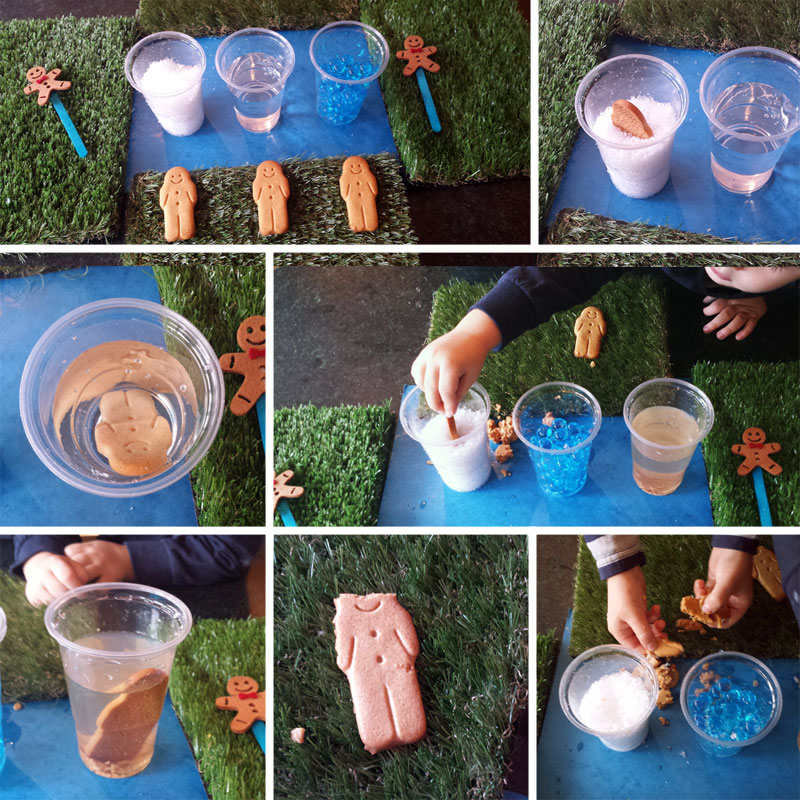 For our third activity we did a simple Gingerbread Man and shapes hunt. My 2yo particularly loved this activity because he adores being messy. Needless to say, there was a snow blizzard in my kitchen. For this activity we literally used felt gingerbread men, and brightly coloured cardboard shapes, all buried in fake snow. 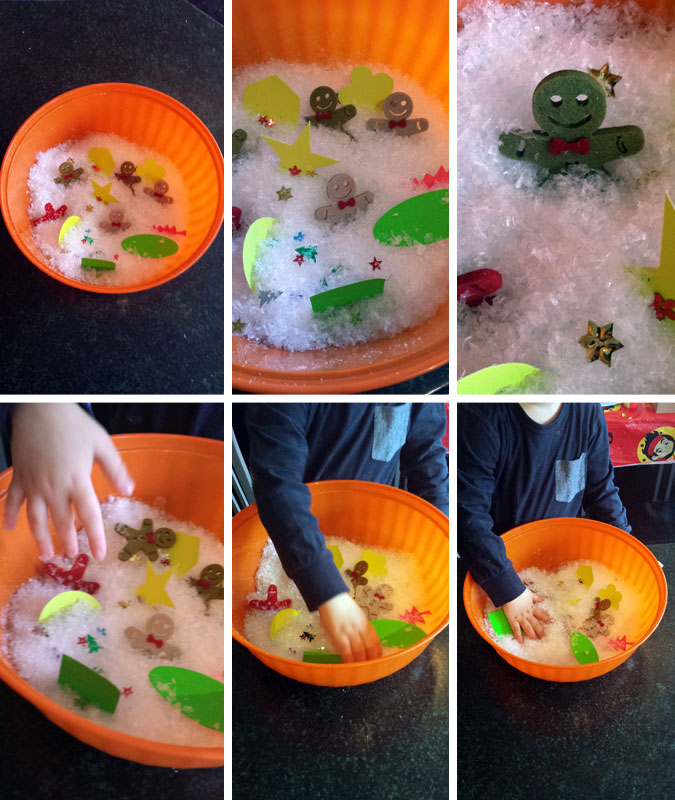 Our fourth, and final, activity ended the theme on a high. We baked gingerbread men biscuits! My boys love cooking, so this activity was a big success. They loved exploring the different textures of the flour, sugar, and spices. They enjoyed smelling the ground ginger and ground cinnamon. This activity was particularly helpful with my sensitive 4yo, it made him step out and become adventurous with smells and tastes. After we had pressed out the gingerbread men and popped them in the oven, the boys explored with some left over gingerbread dough. They loved creating shapes with it. Once the biscuits were cooked and cooled, the boys loved decorating them. 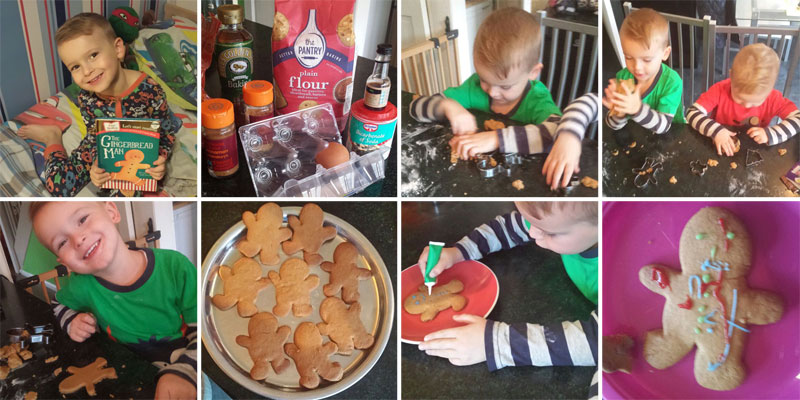 We have loved being part of this fairytale blog share.

Please stop by and take a look at the work of the incredible people I have worked with this week:

The lovely Victoria from Silly Sparkles

The lovely Amy from Learning and Exploring Through Play

The lovely Emma from The Adventures of Adam

And last, but not least, the lovely Louise from Building Blocks and Acorns